Aesculap AG is one of the world's leading manufacturers of medical products. Founded in 1867, the company has been one of four divisions of the family-run medical technology and pharmaceutical manufacturer B. Braun Melsungen AG. With intralogistics increasingly reaching its capacity limits at Aesculap headquarters in Tuttlingen, Baden-Wuerttemberg, TGW was asked to provide its expertise in the area of intralogistics. In recent months, the project team has completed one of the largest retrofit projects in the history of TGW.

From the central Aesculap logistics hub to the north-west of Lake Constance, doctors and hospitals all over the world are supplied with surgical instruments, implants, and special products for vascular diagnostics. A team of TGW specialists has significantly expanded and upgraded this distribution center built in 2008. Thanks to dynamic processes and a high degree of automation, the overall performance of the system is now twice as high.

The existing automated mini-load warehouse with TGW Mustang and Booster storage and retrieval machines was upgraded with a shuttle system consisting of three aisles. Now, 39 energy-efficient Stingray shuttles provide storage and retrieval services. The containers can be stacked on top of each other: This allows maximum flexibility for container heights, and the floor space can be used very efficiently.

Goods receipt and shipping areas were also upgraded and the conveyor technology loops were expanded with energy-efficient KingDrive® technology. In addition, the team also brought the controls system and software up to date. All remodeling and expansion work was carried out during ongoing operations, as downtimes were not an option: Hospitals and doctors depend on fast and, above all, reliable delivery.

Following the extensive upgrading, 4,000 deliveries now leave the logistics center every day. As part of its “Global 2030” project, Aesculap has prepared their intralogistics system for the growth forecast for the coming years. “We had reached performance and volume limits. Flexibility, stable processes, and high reliability were particularly important to us as we set out to expand the system,” says Bernd Hermle, Head of Logistics at Aesculap AG. “We can now prioritize the orders in our system. If an order is received by 5 pm, European customers will receive their supplies the very next day – and anywhere in the world within one to three days.” 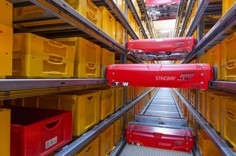 Prerequisite to the project was an extensive TGW software upgrade. Conversion was necessary in order to seamlessly connect the existing system with the new areas such as the shuttle, and to create a homogeneous end-to-end system. “We are very pleased that we were able to satisfy customer needs with our mechatronics, controls and software package,” emphasizes Christoph Wolkerstorfer, CSO of TGW Logistics Group. Bernd Hermle adds:  “Of course, a large, complex project has to survive many a critical phase. But the top-notch results are proof of great cooperation with TGW. Thank you so much for that!”