Expanding with a new building for better performance: Stahlgruber, a distributor of vehicle spare parts, garage equipment, tools and accessories for the automotive industry, selected TGW technologies when expanding its logistics center in Sulzbach-Rosenberg, including new construction of the receiving area and an automated mini-load warehouse.

Expanding with a new building for better performance: Stahlgruber, a distributor of vehicle spare parts, garage equipment, tools and accessories for the automotive industry, selected TGW technologies when expanding its logistics center in Sulzbach-Rosenberg, including new construction of the receiving area and an automated mini-load warehouse.

For the seventh time Stahlgruber, headquartered in Poing, has expanded its logistics center to further improve its fast spare parts service to customers. Completed within 12 months, the current site grew with the addition of a building in excess of 247,500 square feet (23,000 square meters), linked to the existing facility with a 197-foot (60-meter) bridge, including a TGW pallet conveyor connection.

Stahlgruber's continuous growth through subsidiaries abroad was the main reason for the expansion of the site. In 2013, the company acquired a majority stake in PV Automotive GmbH, headquartered in Duisburg. Since then, the Stahlgruber logistics center has been responsible for the replenishment of PV, requiring the new facility to handle more than 155,000 items.

In the old system, approximately 70,000 order lines left the warehouse every day.

"The new automatic mini-load warehouse will help us handle capacities of 100,000 items in a two-shift operation. That way, customer orders are filled more precisely and faster for shipping," explains Andreas Schoene, Logistics Manager at the Stahlgruber distribution center. "Up until now, we worked in a three-shift operation because express deliveries—guaranteed to arrive at 7:00 a.m. if ordered no later than 6:00 p.m. the day before—had to be prepared overnight." 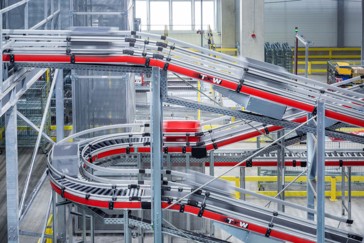 As part of the new facility, TGW built a new receiving terminal that optimizes the received goods’ travel through the logistics center. Upon receipt in pallets or grid-boxes, items are routed based on storage destination: some full pallets are transported directly to the existing pallet warehouse over the bridge via TGW pallet conveyor; others are sent to 44 decanting workstations connected to the tote conveyor system for depalletizing and distribution into reusable plastic storage totes that are transported to—and stored in—either the existing shelf-based picking area or the new mini-load warehouse; and some pallets are routed to eight ergonomic automated picking stations for direct picking from pallet.

After the received pallet of items has been scanned, a display at each of the 44 decanting stations informs the employees about the required number of items to put into a provided empty tote, which is then transported to the automatic mini-load storage warehouse. "When we designed the workstations we also considered a possible expansion in the future due to the growth of Stahlgruber," notes TGW Project Manager Josef Eibel. 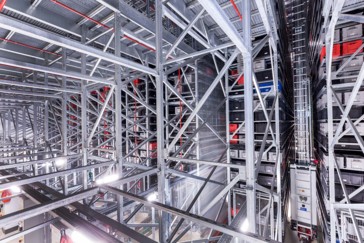 The new automatic mini-load warehouse includes 18 aisles and TGW Mustang storage and retrieval machines. Twister load handling devices transport the goods to and from 165,800 storage locations at rates up to 118 movements per hour. As a special design feature, the automatic mini-load warehouse consists of two storage levels with nine aisles each, and two separate storage and retrieval levels. In total, the warehouse extends 85 feet (26 meters) high to support high throughput performance.

A sequencing buffer directly connected to the automatic mini-load warehouse sorts the retrieved items according to the orders and forwards them to ergonomic picking workstations. Thanks to the new automation, fewer workers will be needed to pick from the existing static shelving rack system because the majority of small parts are now stored in the high-performance automatic mini-load warehouse. 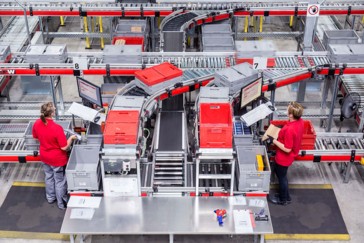 The control and integration of the new warehouse and conveyor system, as well as the consolidation of picked items at ergonomic workstations, has boosted overall order fulfillment efficiency and throughput. One conveyor line transports empty roll containers to designated static storage picking stations, as well as moves loaded roll containers to the shipping area. Further, the same conveyor line connects the existing facilities with the new one.

TGW’s tote conveying system measures 2.5 miles (4 kilometres) long and stretches over several levels, connecting various warehouse areas in the new building. It is supported by TGW KingDrive® and storage and retrieval machine technology to increase the efficiency and performance of small parts picking and delivery.

As Eibel explains: "The system was developed in close collaboration with Stahlgruber. Therefore, it is perfectly tailored to their unique needs. At the workstations, pallets are lifted to associates’ waist level for optimum ergonomics."

The shipping area was also adapted in the new system. "In this area we added a new shipping line and expanded the dispatch sorters. It was especially exciting to renew and update the conveyor system of the shipping area, which was more than 20 years old," notes Eibel. "Needless to say, performance has increased significantly and noise emissions have been dramatically reduced compared to the old system."

Because this area was restructured during live operation, Eibel calls it "open heart surgery." Work had to be done on weekends in order to not affect the facility’s performance during the reconstruction phase. "The coordination between all involved companies was very challenging, but the team worked together perfectly," he recalls. "We were able to double the shipping area’s performance thanks to the new conveying system leading to the outbound area!"

"The new system for Stahlgruber is an optimized concept, thought through from the point of receiving to the point of shipping. We were responsible for the design and installation of the pallet conveyor and storage and retrieval equipment in the receiving area, as well as for the new automatic mini-load warehouse and the entire conveyor system for totes, roll containers and pallets, plus those storage and retrieval machines. Furthermore, we also contributed to the design of the ergonomic workstations for receiving, repacking, picking and shipping areas in order to provide optimal conditions for the employees," says Eibel.

In addition to the mechanical equipment, TGW also delivered the controls equipment up to the programmable logic controller (PLC) level via our partner SITLog. Material flow control, WMS and visualisation were implemented by Stahlgruber.

Downloads
TGW Press Information - Stahlgruber trusts in TGW technologies
DOCX
54.14 kB
The automatic mini-load warehouse with 18 aisles and Mustang storage and retrieval machines is the core of the new system.
JPG
2.51 MB
A sequencing buffer is directly connected to the automatic miniload warehouse. This buffer sorts the reservations according to the orders and forwards them to the workstations.
JPG
2.09 MB
Ergonomic goods-to-person picking stations.
JPG
1.66 MB
All totes are transported through the logistics centre by TGW KingDrive® conveyor equipment
JPG
2.25 MB
Back to overview
Explore TGW