To improve people's quality of life with its products – this is the goal of BSH Hausgeräte GmbH. Celebrating its 50th birthday this year, Europe's largest appliance manufacturer has acquired a new intralogistics system with integrated robots from TGW Robotics. A lot goes on behind the scenes within the compact system, which takes up just 1,615 square feet (150 square meters), and the same could be said about the BSH story of success.

Since its foundation as a joint venture company by Robert Bosch GmbH and Siemens AG in 1967, BSH Hausgeräte GmbH went from being a German exporter to the second largest appliance manufacturer in the world. Continuous increases in staffing are a testament to the success of the company strategy. In roughly 40 factories around the world, BSH manufactures state-of-the-art appliances that meet the company's goal of improving its customers’ quality of life through its range of products.

To continue to ensure this premium level of quality, new, higher-performing processes were needed. At the BSH facility in Dillingen, Germany, two six-axis robots from TGW Robotics took over the tasks of sorting and handling the base supports for dishwashers, as well as their removal and buffering. They now also handle the subsequent loading of products onto containers.

When restructuring the base support production process, the company invested heavily in the acquisition of new injection molding machines and implementing pioneering and sustainable automation. 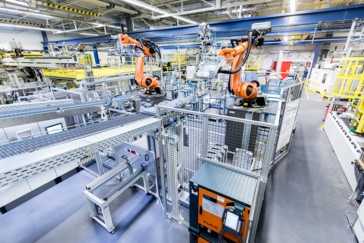 In 2016, TGW Robotics was commissioned by BSH to be the prime contractor for the construction of a stacking station worth several hundred thousand Euros. Sebastian Feistl, Design Engineer at TGW Robotics, explains: "The initial point of reference was a similar system, but with a higher cycle time and a product range in need of minor processing. This system was completely eliminated and replaced with our new one."

A link to the injection moulding machines was also required, the number of which doubled from three to six. This presented the teams with an additional challenge. "For the new system, we only had 1,615 square feet (150 square meters) of space! So you can imagine the extremely narrow parameters we were given for the planning, design and, ultimately, the implementation. A fully automatic detection and distribution process for the base supports of the dishwashers at four completely independent workstations also had to be integrated."

Thanks to the process implemented for component detection, all the existing base support tools can now be distributed across all the new injection molding machines throughout the interconnected system, regardless of their version.

This allows for fully automatic production of several base supports at the same time, which are then sorted and stacked on the transportation systems. The processes are displayed visually on user-friendly monitoring screens.

The transport of the base supports and the containers (which are also provided automatically via the system), was implemented at the request of the customer. The heart of the system is the robot cell with two six-axis robots.

Within the system, the two robots interact with one another. "A pre-defined hole pattern allows the robots to detect the base supports. The robot can then sort and gather multiple, identical base supports into a package of 10 in one magazine," explains Feistl. “To prevent the risk of worker injury, the area is protected by our proven safety technology".

TGW Robotics also deployed its proprietary gripper technology with the installation at BSH to ensure optimum performance and precise handling processes. "We used a multi-purpose gripper to handle the individual base supports. This way, the robots can gather the 10-piece packages and temporarily store them. Every millimeter counts here – not just in the handling of components, but also in the external utilization of the robot’s range within the small space." 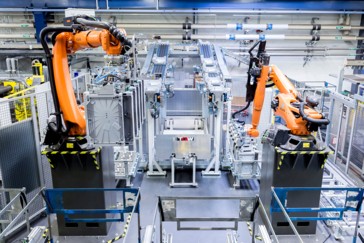 BSH was able to achieve big goals in a small space: performance was significantly enhanced and the facility can now process a broader range of products. "We are delighted that our technology performs so well in such a small space. We are proud of our customers’ success and of what we have achieved together," says Feistl.

The implementation of TGW’s defined robotic handling processes created the foundation for the successful introduction of the new stacking station. With the new stacking concept, the strategic structuring process achieved met the high quality standards of the in-house production operation. The interlinking of the existing machines with the new injection molding machines further optimized the existing production while creating new synergies. Additionally, digitalization of the manufacturing process was also driven forward as the basis for Industry 4.0.

Downloads
TGW Press information - TGW robots look after the household at appliance brands Bosch and Siemens
DOCX
49.34 kB
The heart of the new system is the robot cell with two six-axle robots.
JPG
1.51 MB
Two six-axle robots from TGW Robotics took over the tasks of sorting and handling the base supports for dishwashers as well as their removal and buffering.
JPG
1.38 MB
A pre-defined hole pattern allows the robots to detect the various base supports. The robot can thus sort and then gather identical base supports into a package of 10 in one magazine.
JPG
1.39 MB
Back to overview
Explore TGW